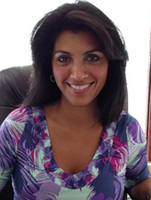 Stella earned her Juris Doctorate from New York Law School in 1998 and received her B.A. from Oswego State University in 1994. Stella is admitted to practice law in all state courts in New York and Rhode Island and the U.S. District Court - District of Rhode Island. She is a member of the Rhode Island and New York Bar Associations. Stella Guerra, a native New Yorker, started her law career in New York before she moved to Rhode Island in 2000. She formerly also worked for 5 years as the managing attorney of a law firm in Providence, RI and has been in private practice for herself since 2007.

Stella has taught numerous seminars throughout Rhode Island in such areas as corporate law, residential and commercial real estate matters and homebuyer's workshops.

Stella speaks fluent Spanish and is especially sought out by the Hispanic community and those clients seeking representation in Spanish. She is a member of the Foreign Language International Honor Society and the French National Honor Society. In commitment to her serving her community, Stella is a former elected State Representative of the State of Rhode Island and a former City Councilwoman for the City of Woonsocket. In support of philanthropies and volunteer work, she is also an alumna of the Delta Zeta National Organization.